Civil Protection is a machinima science-fiction/comedy series, created with Source SDK, allowing for some impressive animations. It is created by Ross Scott, who is also the creator of Freeman's Mind. It also features animation and maps by a plethora of volunteers. It is a show about 2 Metro Cops named Mike and Dave, as they go through their daily lives as cops in a post apocalyptic world, and sometimes have adventures together, which never seem to turn out good.

It is set during the game Half Life 2. Both of the main characters wear gas masks, covering their faces. This is because that this is the standard combine uniform and that Ross Scott always intended for his characters to be faceless. It can be found on youtube, or at Ross Scott's website Accursed Farms

Mike is a somewhat eccentric but good hearted cop, a fan of heavy metal (his ideal superpower is the ability to render people unconscious with a guitar solo), he serves as the voice of reason in the series, and is quite well educated, despite sometimes coming off as incompetent due to his minor paranoia of Were-Wolves and Vampires. He believes the Resistance movement in Half Life 2 to be crazy and outmatched, and while he does not enjoy his job, he does not seem to have any problem with aliens ruling Earth. While not nearly as sadistic and violent as the metro cops portrayed in Half Life 2, he will threaten people with his stunstick occasionally, and is not above arresting people for no good reason (such as the "Man with no Shadow", in "Shadow of a Doubt"). He is a far poorer shot than Dave, though this is understandable given Dave's incredible skill level. He is something of an environmentalist and praises the fact the Combine have by invading Earth ended mankind's dependence on oil, ended global hunger, reduced crime to the lowest rate in recorded history and eliminated pointless political debates (though all in less than ideal ways). A running joke in the series is that at the end of every episode (with the exceptions of the "What is Machinima" special, "Shadow of a Doubt" and "Friday"), Mike is horribly wounded. He is voiced by (and based on) Ross Scott.

Dave is a psychotic, funny, kooky cop who is always cheerful and optimistic, but not too bright sometimes. He also seems to be very crazy, as he reveals several times in the series that he does things such as shoot pictures of his friends then decorate his apartment with the pictures (his ultimate superpower would be the ability of mind control which he gleefully admits he would use on everyone in the city). Unlike Mike, he seems to appeal more to the resistance and has some moral qualms about working for aliens. Like Mike, he is not an abusive cop, but seems a little too proficient with his USP Match Pistol for his own good, and has been shown doing reckless things, such as jumping on moving trains and going fishing with an MP7. He also has a habit of trying to befriend aliens such as Striders and Houndeyes regardless of Mike's warnings. He is voiced by Craig Mengel.

A citizen of City 17 constantly appears in the episodes. He has been seen working as a camera man for Mike and Dave, and also was "The Man with no Shadow" in Shadow of a Doubt. It is unknown if all these appearances are the same person, despite Mike and Dave never saying they've met him before in his appearances. He is voiced by F.C. Meixel.

Another unnamed character who appears throughout the series, Vort is very eccentric. He has a gravelly voice, and is heavily implied in many episodes to be a criminal, likely a drug dealer as seen in background events. He is voiced by Ross Scott. His name is not said during the series, but you can see his name via subtitles.

This is the first episode in the series and establishes the ground for the characters. It starts with Mike asking Dave who keeps stealing his lunch from the break room. Although Dave wasn't listening and goofs off pretending to be a ninja. Mike eventually gets tired of this, and whacks him with his stunstick (a combine invention, basically a tazer and baton rolled into one). This in turns knocks Dave to the ground and electrocutes him, causing him to lie on the ground and cry in agony, while Mike tells a small crowd of citizens who have come to watch the two fight: "Uhh...nothing to see here folks..."

Dave finds a radio in a dumpster, but everything at the station has been acting weird because of the aliens (The Combine) taking over the world, so Mike and Dave discuss the combine, their name, and their jobs. Mike also goes into great detail about how idiotic the resistance movement is, and how much he he has no problem with working for the Combine. They eventually finds some pigeons, and shoot them for fun. After this, they attract the attention of a strider. While Mike seems (rightfully) scared, Dave makes friends with it and nicknames it "Simba". It eventually hits Mike, launching him several meters and causing Dave to say: ("That was not very nice. Bad Simba!")

Episode 3: Shadow of a Doubt[]

Mike and Dave encounter an unusual individual, whom Mike predicts is a vampire because of his lack of a shadow. The man denies being so, and just wants directions to get to a train. Mike does not believe him,and ends up chasing him through the streets and arresting him for no good reason.

Dave jumps onto a train (despite Mike telling him how stupid it is) and goes on a short journey while Mike contemplates his fate. Mike seems worried by both the fact that Dave might be dead, and that he might get blamed for it. Eventually Dave comes back fully fine, and dares Mike to jump on the next train with him. Mike at first is reluctant to do so, but after Dave promises to buy him Chinese food next week, he agrees. They try to jump, but they both end up getting horribly injured.

Mike and Dave try to film a public service announcement on safety tips for Halloween. They end up not being very effective, and Dave reveals a little too much about how dangerous napalm and mailbox bombs are. He unintentionally reveals how to make napalm, bombs, and other dangerous devices.Meanwhile, Mike insists on going over werewolf safety. In the end, fast zombies end up jumping in and mauling both of them.

Mike and Dave reflect on the world of the past, describing the past oil crisis, going into great detail about pollution, and how they were heading toward a crisis in the past. They both eventually conclude that with the mass genocide perpetrated by the Combine, the world is much better place now, due to the fact there is no more politics (you either do what the government says or die), overpopulation, or pollution. Originally created for an environmental contest.

This is the seventh episode of Civil Protection series. In this episode Mike & Dave going on their patrol through City 17, stop at a doughnut shop, discuss slayer, and have an encounter with a Houndeye. Dave starts to make friends with it, but Mike recognizes the danger posed by it, and pulls his pistol out on it. Dave gets in the way and stops Mike from shooting it, but the Houndeye charges a deadly sonic blast, launching both of them several meters. The episode ends with Mike saying: "DAAAAVE! Next time I'm just going to shoot you instead!".

During a foggy day (In the location of Shadow of a Doubt) Mike and Dave begin worrying about the lack of people when they hear a strange noise coming from the tunnel. As they enter to investigate, Dave is almost run over by a car, but he manages to slide over the wind-shield while Mike retaliates and calls for back-up. The two then investigate the tunnel, and discover a large hole in the wall. They go in and explore the cavern, which looks like an abandoned construction project. Eventually they find a small wooden shelter with furniture. Though the owner is gone, Dave reads the contents of his journal. It reveals the owner discovered the cavern and the shelter, though the flashback shows the lights working. After he was evicted from his flat, he moved to the shelter. He seemed happy, until he begins hearing strange noises coming from the other side of a steel door in his shelter. The phenomenon continues, and he decides to explore the tunnels behind the door some time soon. As he writes down his thoughts on what lives there, it stops. Mike hears the noise again, and Dave says that the entries ended a week ago. They explore the tunnels, and Mike begins chasing a strange light until he trips after running into a dead body. When he gets back up, Dave has vanished and he is locked in the tunnels when the owner (who appears to be driven insane) shuts the steel door on him. Eventually Mike is captured, and finds himself cocooned along with Dave in a strange room. A Stalker comes by, and Mike attempts to convince it to free him, but it leaves when something else comes into the room: small clawed creatures with slight resemblance to Ichthyosaurs. The credits roll as Mike is attacked by the creatures as Dave babbles in R'lyehian. A post-credits scene shows the insane owner looking at the camera.

The episode is split into two parts.

Special: What is Machinima?[]

Mike and Dave answer viewer mail, and get one mail asking them "what is machinima?". They deny knowing what it is, and assume it is some kind of slang, going into detail about the drug busts they have taken part in and the slang they commonly hear on the streets. 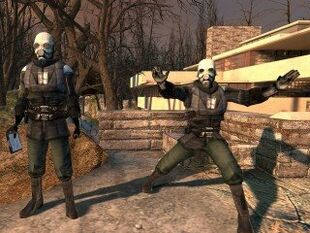 Mike and Dave in "What is Machinima" 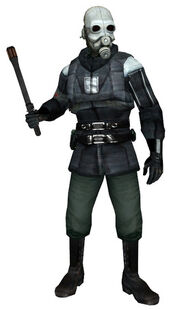 Mike with a stunstick.

The USP Match pistol, used by civil protection (and therefore, by Mike and Dave).

Community content is available under CC-BY-SA unless otherwise noted.
Advertisement